We're the kind of people that prefer to drive down on a holiday rather than travel the more convenient way - by train. Besides, driving down to Goa has it's own advantages...mainly because NH17 passes through many picturesque coastal gems along the way....like Maravanthe beach which comes up just after Kundapur (P.S - the sea at Maravathe is highly unsafe to swim in, so if u think of stopping, let it be only for photo ops!) 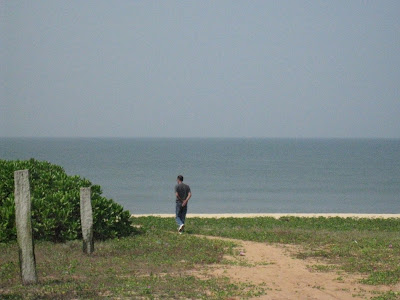 Be warned that there are some patches of NH17 that cannot even be considered as highway (especially the parts through Bhatkal which will require you to drive betw 20 - 40kph!) but most of the highway is in fairly motorable condition and very soon, we can expect 4 lane roads at places like Udupi.
As we have family in Goa and prefer to get there in time for Lunch, we try to leave as early as 4.30am from Mangalore, so that we can avoid heavy vehicle traffic between Udupi & Kundapur. That means we reach Panaji between 11 - 11.30am, with 6 - 7 hours of driving including 1 halt for Breakfast at Kundapur and occasional calls of Nature.
Hariprasad's at Kundapur, is likely to be the only decent place open for breakfast that early, and depending on when you get there (we normally stop there around 6.30), you may get a wider selection than the regular Idli Chutney Sambhar n Hot Coffee. Or stop at RNS Highway hotel at Murudeshwar for nice clean restaurants and wash rooms, you'll get there by 7am. Unfortunately at that time, there's not much breakfast selection, probably just Idli Sambar, Chutney and Coffee / Tea. If you prefer to have a late breakfast, look out for Kamath Executive at Honnavar, it's to the left within minutes of entering the city and has a very clean washroom for ladies, plenty of parking.
﻿﻿﻿
﻿﻿﻿

If you prefer to start late and stop for lunch along the way, we highly recommend Makara Village, just beyond Gokharna town (NH-17, hiregutti, Gokarna) on the right side of the road, which has clean wash rooms, an open air restaurant and serves really delicious fresh seafood meals (they have non seafood and vegetarian selections also, but you have to try the seafood!) Assuming you're leaving Mangalore around 8am, you should get there before 1pm.
﻿
﻿ What's really appealing about driving down to Goa apart from the stunning views, is NH17 which is fairly unswervingly between Mangalore and Goa, making the overall journey more enjoyable and less tiring than most road trips.

If you happen to reach Madgaon (Margao) before 2pm, don't forget to buy some mouthwatering Rosary Sausages to take back (traditional spicy chourico sausages but shaped like rosary beads instead of the regular long rings) at Margao market (you have to pass through margao city  on NH17 to get to the market, it's at the end just before the circle...you may have to find a place to park and walk back). If you're staying within driving distance of Margao, you can always make a separate trip to buy them, but if you're likely to be passing Margao only on the way In/Out of Goa, plan when to buy wisely as they are open only from 8am to 2pm. 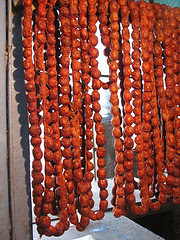 It is a wonderful post by your end, very nice that you have shared your experience and such interesting stuff here. This post is going to help me in my upcoming trip to Goa.Thanks and keep sharing.

It was great reading your blog.The road trip of yours is really awesome and the way you explained is really beautiful thank you for sharing the information. SRM Travels